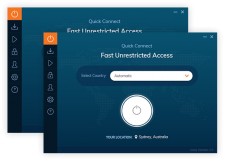 Ivacy has recently announced the launch of its new Windows app that is offering some powerful new features such as the Smart Connect, Manual Dialing, Smart Purpose Selection, Secure Downloading and the In-App Support Center.

SINGAPORE, SINGAPORE, December 22, 2017 (Newswire.com) - Ivacy VPN – industry’s leading VPN service provider, has redesigned its apps and website and is celebrating the streamlining of its infrastructure for the launch of new and improved Windows app, now available for everyone to download.

The new design of the app complements its user interface, guaranteeing users will now benefit from an improved user experience. The new user-friendly Windows app comes packed with powerful new features that will further enhance online privacy by leaps and bounds.

Users' suggestions were taken into consideration to overhaul Ivacy's infrastructure for the betterment of the service while introducing a new design for greater accessibility and usability.

Some new and noteworthy features to expect from the latest build are as follows:

Users will be able to connect to the fastest possible server with the click of a button. No manual configurations or tweaks are required to make this possible.

Choose a specific server from any city or country to be able to access content from that region in particular. The feature better suits individuals being restricted from accessing content across different regions.

The VPN can be configured to prioritize the users’ needs first and foremost. The feature is divided into 3 distinct use cases, for which VPNs are mostly opted for in the first place i.e. streaming, torrenting and/or unblocking geo-restricted content.

Ivacy VPN now utilizes upgraded servers to make downloading content simple as well as secure. Additionally, server-grade security protocols ensure malicious files and viruses are first identified and then notified to the user, safeguarding their devices at all times.

The in-app support center and ticketing system have been introduced for quick submission and resolution of problems. You can submit your query through a ticket that would be resolved by Ivacy’s support engineers as soon as possible, who are available 24/7.

Apart from usability improvements for its Windows app, the VPN service provider has also bolstered its security protocols with the inclusion of “Internet Kill Switch”, a feature that terminates the internet connection if the VPN connection drops, ensuring internet security at all times.

Considering the rapidly evolving cybersecurity space, Ivacy VPN is working on improving the features of apps on other platforms as well, whereas, for the time being, Windows users can rejoice with the new version of Ivacy’s Windows app.