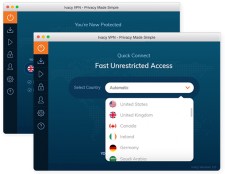 Ivacy users wanting more from the Mac app, will be pleased with the latest update since it now comes with features that were previously missing, although present in other apps.

SINGAPORE, March 5, 2018 (Newswire.com) - Ivacy users will be pleased with the update of Mac VPN, which has all those features that were previously lacking; although present in other apps.

The Cyber Security Company announced the new update comes with improvements for the UI and UX. It brings fixes for connection issues that plagued the app’s previous builds, and even comes with a new purpose under Purpose Selection.

Regular updates with fixes and useful features are what is needed to satisfy our customers. Being a VPN service provider, and taking into account how internet security is becoming extinct, we need to push out for internet users to stay ahead of the curve.

Apart from the usual fixes and improvements, here are a couple of new features that come with the latest update.

No matter what you may download, Ivacy scans files you are downloading on a server level to ensure you never get compromised ever again.

No configuration or tweaking required, connect to a VPN server quickly with the click of a button.

Choose a mode beforehand so that the app starts with the said mode, ready to execute.

Ivacy has kept well on its promise to release new apps, features along with upgrades for existing ones. Previously releasing updates for its Windows, Android, iOS and Kodi app, Ivacy has ensured that its service as a whole work with any and all platforms. The launch of Mac app is just another step forward in making it possible for its customers to enjoy the secure and unrestricted internet.